I had an 8 hour layover in Atlanta on my trip from Rochester to Amsterdam in August, so I left the airport and went to the Georgia Aquarium! The aquarium has four juvenile whale sharks and two manta rays in the big tank! 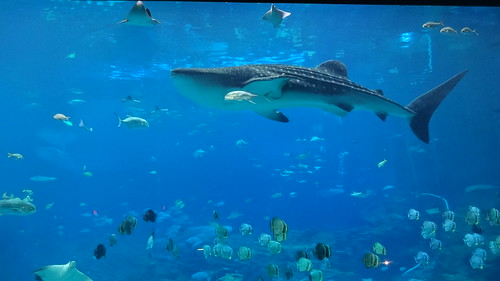 It’s pricey (~$40 for adult admission), but I like to think that it’s both admission and supporting the aquarium’s conservation efforts, so I just sucked it up. Also, I was the only non-kid without a kid of my own there, but it seemed like lots of people brought their babies just to have an excuse to go themselves (because the baby doesn’t understand what’s going on and won’t remember any of it). But it was worth it! I strongly disagree with keeping dolphins in captivity, so I didn’t pay extra to see that exhibit.

I got there 5 minutes after they opened, so I didn’t wait in a line to get my ticket, but the aquarium entrance has some serious crowd-control set up outside, so there must be big lines later in the day and over holidays. I stuck around to watch them feed the whale sharks and sea otters — it was pretty cool.

This is one of two aquariums in the world with whale sharks (my boyfriend has been to the other one in Osaka, Japan!), and they have a clear tunnel under the big tank that some of the first pictures are from. It was so cool!!